True North - The Shocking Truth about "Yours, Mine and Ours" 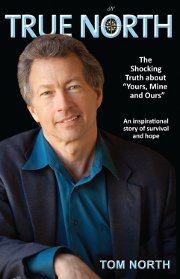 Tom North is one of the eight North children, who together with the ten Beardsley children, became the family which was featured in the 1968 film, "Yours, Mine and Ours" starring Lucille Ball and Henry Fonda, and again in the 2005 version starring Rene Russo and Dennis Quaid. The book begins in the 1950s on Whidbey Island, Washington, where Tom s mother, Helen North, becomes a widow when she was just 30 years old and pregnant with her eighth child. Tom was six years old, the fourth child in the North family. Not long after, Helen North met and married Frank Beardsley, a man with 10 children, and they moved to Carmel, California. The North children were adopted and their names were changed to Beardsley. But, it wasn t one big happy family as the movies depicted. The domestic violence, abuse, and even sexual abuse created a life of intimidation, confusion, turmoil, fear and depression for the North children. All hope seems lost as Tom realizes that he is caught in a prison and there is no way out. When he finally leaves home, he travels on a journey of self-discovery, survival and healing. Years later, Tom miraculously leads his family in counseling sessions where shocking truths are revealed. He then comes full circle as he reclaims his father s name and is finally, True North. Tom takes you on a journey as he travels to Alaska and works on a fishing boat, to Iowa at MIU, to Connecticut, Washington State and finally back to Carmel, California.