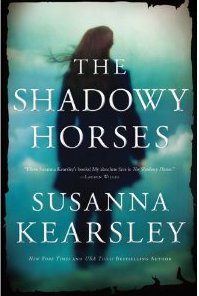 My heart lurched. Stopped. Began again. Over the sudden roaring rush of blood that filled my ears I heard a herring gull cry out its warning high above the twisted trees, and then the whispering footsteps passed me by and faded in the softly blowing grass.

Set in a small fishing town on the coast of Scotland, Susanna Kearsley’s novel follows protagonist Verity Grey on an unlikely adventure with charming archeologists, ancient Roman ghosts, and modern day psychics. The Shadowy Horses unfolds slowly and beautifully, combining mystery, history, romance, and the supernatural into an entrancing novel.

Verity, independent and wryly humorous, leaves her London flat for a summer at Rosehill, a Scottish estate owned by the eccentric and wealthy Peter Quinnell. Quinnell is certain he has discovered the missing Roman Ninth Legion, his evidence based on the second-sight of 8-year-old Robbie McMorran. Robbie has seen and spoken with the Roman soldier who walks the grounds of Rosehill, and Quinnell assembles his team of experts, archeologists, and students to uncover the campsite, grave – whatever it may be – where the Ninth Legion once stood.

The dig is also home to handsome archeologist David Fortune, and the attraction between Verity and David is tangible from the start. Throw in Verity’s womanizing ex-lover, Quinnell’s complicated granddaughter, and the enigmatic McMorran family and the cast of characters is complete.

“I almost always start with the heroine, because she’s going to carry the story for me and the reader,” Kearsley says of her character creation. “And then, because this was a book about an archaeological dig, I assembled my ‘field crew.’ I knew I’d need a leader, and I thought it would be interesting to make him a sort of modern-day Schliemann, someone who’s really consumed by his passion to find the lost Legion. The rest of the team sort of fell into place after that. The way they interact with one another happens naturally, too, which makes the writing fun for me.”

Despite the implausibility of psychics and ghosts, Verity and her compatriots begin to believe in Quinnell and Robbie as the inexplicable events and finds start to pile up. It is the setting, haunting and otherworldly Scotland, that make spirits and psychics seem as real as the rest of Kearsley’s characters. The novel remains grounded enough in the living, breathing, human world to be realistic, and I found myself furtively checking under the bed after a night of reading. Fittingly, the novel’s Shadowy Horses, a reference to Irish poet W. B. Yeats’ harbingers of death, keep Verity awake at night as they gallop through the fields of Rosehill, searching for the restless Roman ghosts.

From breathtaking landscapes to edge-of-your-seat cliffhangers, The Shadowy Horses paints a vibrant portrait of the touching point between reality and the paranormal. Kearsley has clearly done her homework on both Scotland and the Ninth Legion and flawlessly intertwines the rich history of the two.

The novel is a must-read for lovers of Scotland, ancient Rome, and anyone who enjoys a good romance/mystery. Plus, Kearsley’s next novel, The Firebird, features grown-up Robbie McMorman as the protagonist, and Kearsley fans will not want to miss their introduction to the endearing Scottish psychic.

“In The Firebird, my heroine, Nicola, works for a Russian art gallery in London, and is trying to prove that the plain wooden carving a woman has offered the gallery really did come from the widow of Peter the Great—Empress Catherine I—as the woman claims. To do this, she enlists the help of a past boyfriend, Rob McMorran—who made his debut as an eight-year-old boy in The Shadowy Horses, and now has grown up to be a hero in his own right. The Firebird is a dual-time story, with interwoven narratives that follow Nicola and Rob in the present day, and continue the lives of several of the characters from my book The Winter Sea in the early eighteenth century. It’s what I call a ‘sort-of-sequel,’ because the books don’t have to be read in any order.”

For more information on Susanna Kearsley, visit her website at www.susannakearsley.com.