First Impressions: How to Write a Great First Chapter

Crack: Rock Cocaine, Street Capitalism, and the Decade of Greed

The Cruel Years of the Crack Epidemic 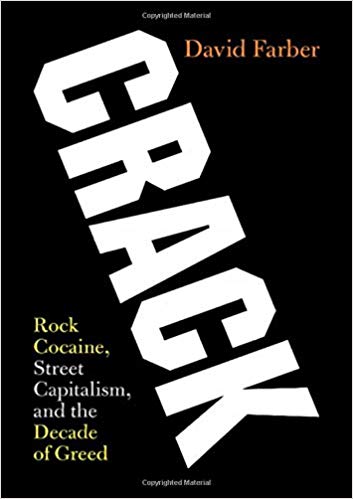 In 1984, when Ronald Reagan was re-elected by a landslide and declared America "open for business," deregulation and tax cuts really got the capital flowing -- but not for everyone. "White flight" to the suburbs had transformed Rust Belt cities like Chicago and Detroit, and the working class jobs that had lured African Americans to northern cities were headed back to the anti-labor Sunbelt and overseas, leaving people trapped in inner-city ghettos to find their own ways to climb the economic ladder -- legal or not.

In this groundbreaking book, Crack: Rock Cocaine, Street Capitalism, and the Decade of Greed, David Farber tells the story of the young men who bet their lives on the rewards of selling “rock” cocaine, feeding the "equal-opportunity addiction" that caused so many to people to give themselves over to the crack pipe, and the often-merciless authorities who incarcerated legions of African Americans caught in the crack cocaine underworld.

Farber, a professor of history at the University of Kansas, lived in New York City during the height of the crack epidemic, and also for a time in Philadelphia, across the street from a small-time crack dealer.

"To become a crack dealer at the local level took very little upfront captial," writes Farber in the book's introduction. "A relatively small supply of powder cocaine could be made into a tidy amount of 'rock,' which could be quickly turned over, allowing for a rapid cash flow -- a fast nickel, in other words, beat a slow dime. Crack cocaine was a business tailor-made for ambitious young people willing to operate outside the law in return for a high rate of return on a limited investment."

He goes on to explain how crack is made: cocaine is mixed in equal parts with baking powder, boiled with water and then cooled down and broken into hard pellets -- hence the "rock" nickname. These pellets were sold for as little as $2.50, so it was perfect for those inner-city denizens living day-to-day and dollar-for-dollar and "desperate to escape, as often as possible, from the drudgery, pain, boredom, or sadness of their lives. Lots of drug users smoked crack: a majority were white. But crack's core customers were disproportionately low-income African Americans who were already disconnected from the labor market."

In 1984, black teenage unemployment was about 40%, so many young men saw an opportunity to get rich quick. The mean streets they lived on were not a high priority for law enforcement, and they had little to lose and much to gain. Some of those gains were monumental: by the early 1990's hip hop artists like Jay Z and Sean "Puff Daddy" Combs were transitioning from drug dealing to music production, with many of their rappers coming straight from the street corners. The whole scene became marketable, from the rings and gold chains to track suits, leather jackets and Air Jordans.

Of course, with all this money movement came the gun violence, the stories of ruined lives, and First Lady Nancy Reagan's "Just Say No " war on drugs. Americans had come to believe, and it was echoed on major magazine covers: illegal drugs were the nation's biggest problem. "Crack scared the hell out of people, and not without reason," writes Farber. The Anti-Drug Abuse Act of 1986 was signed with great fanfare by Reagan, and the following Bush administration kept on the heat. "Victory, here, was defined as locking up however many drug dealers it took to stop the flow of narcotics on America's streets," says Farber. In 1980 there were 4,749 people were in federal prison on drug charges. By 1990 that number had risen to 30,470, and by 1995 it was 52,782. It was a policy trend to imprison, rather than to rehabilitate, that continues today.

David Farber's book digs deeply into all aspects of the crack cocaine years, with interviews, archival research, judicial records, and explanations how a generation of "predominately African American entrepreneurs were profit-sharing partners in a deviant, criminal form of economic globalization." It's a fascinating, enlightening, and groundbreaking telling of one of the most important chapters in 20th Century American culture.