Listen to the Trees: A Poetic Snapshot of West Seattle, Then & Now

An Intimate and Eclectic Portrait of a Community 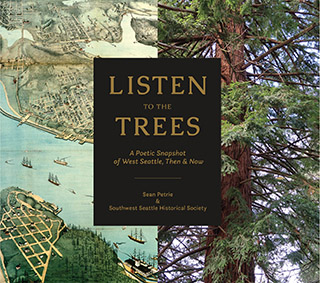 Sean Petrie is 50-year-old law professor from Austin, Texas who takes time off from his teaching job for a few weeks every summer to write poems. Sounds a little strange, and it gets even stranger when you learn he writes these poems on a 1928 Remington portable typewriter he bought on eBay and that he confesses, "yes, it is hard to type on."

It all started when he and three of his poet friends began creating spontaneous poems for people at street fairs and farmers markets. They write poems for anyone, about anything, for free. The group calls it Typewriter Rodeo and published a book by the same name with Andrews McMeel in 2018. Around that same time, Sean started going to visit friends in Seattle, and brought the instant poetry concept to the West Seattle Summer Fest, where he teamed up with the Southwest Seattle Historical Society to ask visitors to their booth: "What do you love about West Seattle?" 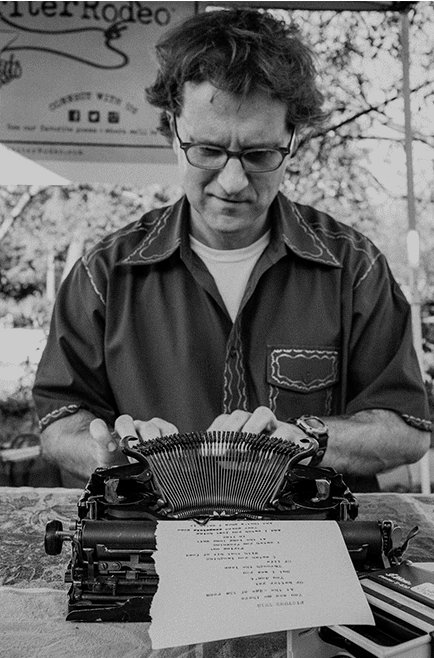 For three days, the mostly local residents, aged 5 to 85, told Sean about a memorable place, event, or experience that made them love their community. He took what he heard and transformed each statement into a poem -- double-spaced on a half letter-sized page -- with its old-timey font and including the "typos," which are considered part of the process when you are whacking away on such a vintage typewriter.

"There is nothing more satisfying to me than the 'clack' of each letter being imprinted on paper," Sean told Tim Robinson at Westside Seattle magazine. "With a typewriter, there’s no 'delete' key, no eraser. You make a mistake, you can’t take it back – just like life, which I find wonderfully freeing; because I KNOW I’m going to mess up with a typewriter lots of times! I don’t worry about it. I just type and let the words flow out."

"At the end of that weekend, we realized the poems could make a collection -- a snapshot of that time and place and community," says Petrie. "We culled the poems and found that so many were tied to West Seattle places or activities. So we decided it would be wonderful to try and pair each poem with photos of those things."

The poems and photos have been collected into book form as Listen to the Trees: A Poetic Snapshot of West Seattle, Then & Now. It won an IPPY Silver Medal in the Poetry - Specialty category in the 2021 Independent Publisher Book Awards. The book combines words and images to great effect, telling the story of this vibrant community and its residents.

"From our first meeting to discuss the material Sean had gathered, I knew right away that there was no real precedent for how it all might come together best in book format," says the book's publisher, Petyr Beck of Documentary Media. "That was what got me excited about the project from the beginning; how do we bring all if this wonderful material together in a book?"

"I was struck by was the beauty of the poems, typed in ink with a vintage typewriter," Beck recalls. "So, we decided to reproduce the poems just as they were, by high-res scanning the typewritten sheets themselves and producing them as images, which felt more authentic than trying to replicate the look and feel as text and design."

A dramatic tone is set by the first poem, the one Sean wrote for Ken Workman, the great great great great grandson of Chief Seattle, famed leader of the area's indigenous Duwamish and Suquamish tribes. Hear Sean read the poem in the book trailer YouTube video here. 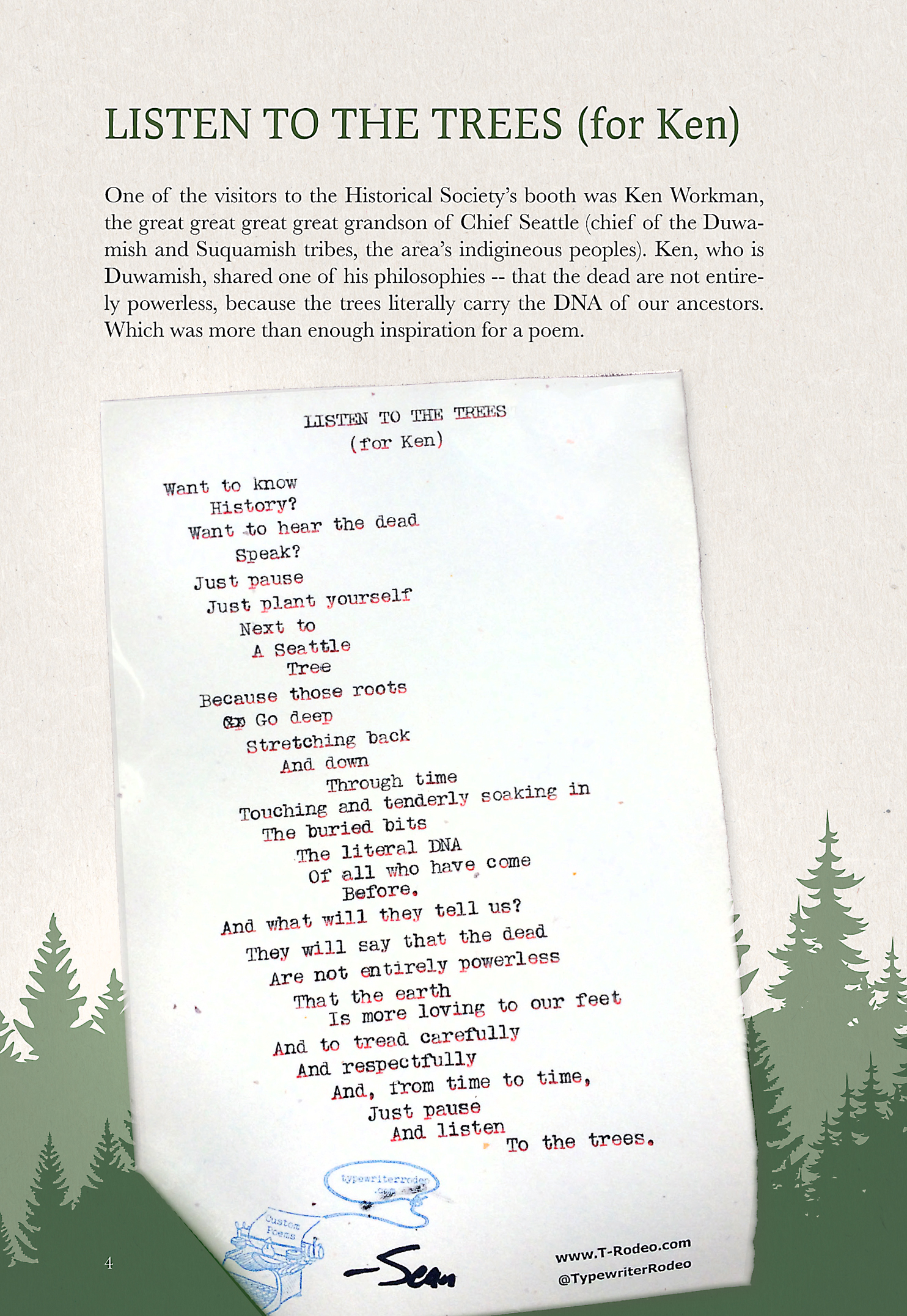 Many poems delve into West Seattle’s past — odes to cherished places long-gone, ancient advice from its native Duwamish inhabitants, and what it was like growing up in a city so steeped in history. And, because of the partnership with the Historical Society, the ideal would be to have both "then" and "now" photos. Sean walked the neighborhoods and took the "now" photos; the Historical Society provided some of the "then" ones. But, several poems still lacked historical photos.

"A big challenge was finding appropriate, book-quality older photos to match with many of the poems," says Petrie. "We contacted several local museums -- MOHAI, the University of Washington Libraries, Seattle Municipal Archives, even Boeing and the Seattle School System. After lots of wonderful help, we finally had gorgeous photos for every poem."

"As a publishing company with West Seattle roots,"Beck adds, "we saw this project as a great way to feature what is so great about our neighborhood. These layouts take you on a tour of West Seattle today, but also take you back in time. The overall effect as you browse through the diverse entries, we hope, is to provide a sense of place in a new way. Not like a guidebook, but more intimate. Eclectic, yes, but also, I think, very honest."

"This book is a snapshot -- visual, poetic, and of just being human," says Petrie. "It focuses on the places and people, worries and wonders, of one small Seattle community. But it also shows that, at times, what is local is reflected in all of us, no matter who, where, or when we are."