The Tasteful Art of Reading and Collecting Cookbooks 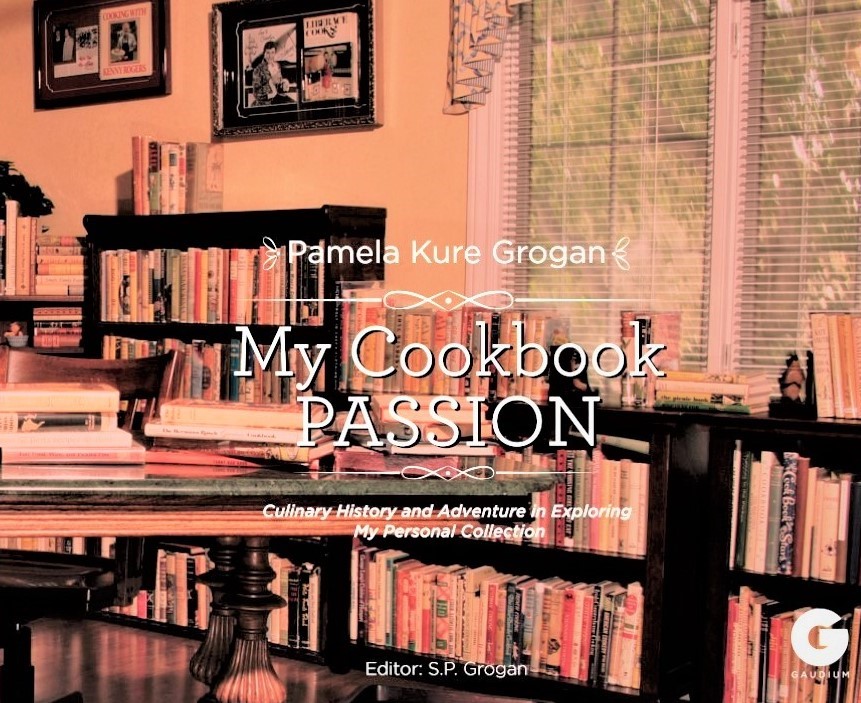 "We are what we eat," goes the old expression, referring to the nutritional importance of eating well. "We are what we read" could be similarly used to imply the importance of enriching our minds. The reading and collecting of cookbooks combines these two notions, and for those who love them it's the best of both worlds: you learn how to cook something and nurture your body, but you also learn something interesting about the author of the recipe. Cookbooks have a long and colorful history, covering a world of lifestyles, regions, and cultures, and according to Pamela Kure Grogan, one of the queens of cookbook collecting and most recently author of My Cookbook Passion: Culinary History and Adventure in Exploring My Personal Collection.

My Cookbook Passion draws from Pamela's 3,000 personal cookbooks she owns, most of them defined as "vintage," published between the 1900's and current, with her favorite era being the 1920's-1980's. "To me," explained Pamela, "my collection tracks the evolution of the changes in the culinary history, going from wood burning stoves to gas and electric; the movement of inns serving travelers food to drive-in restaurants; the impact of foods from the multi-cultural areas of the world driven by immigration; and finally, the great social movements that changed the way we think about ourselves--impacts from women's rights to civil rights—all these are reflected in cookbooks which I find a fascinating microcosm of our world today." 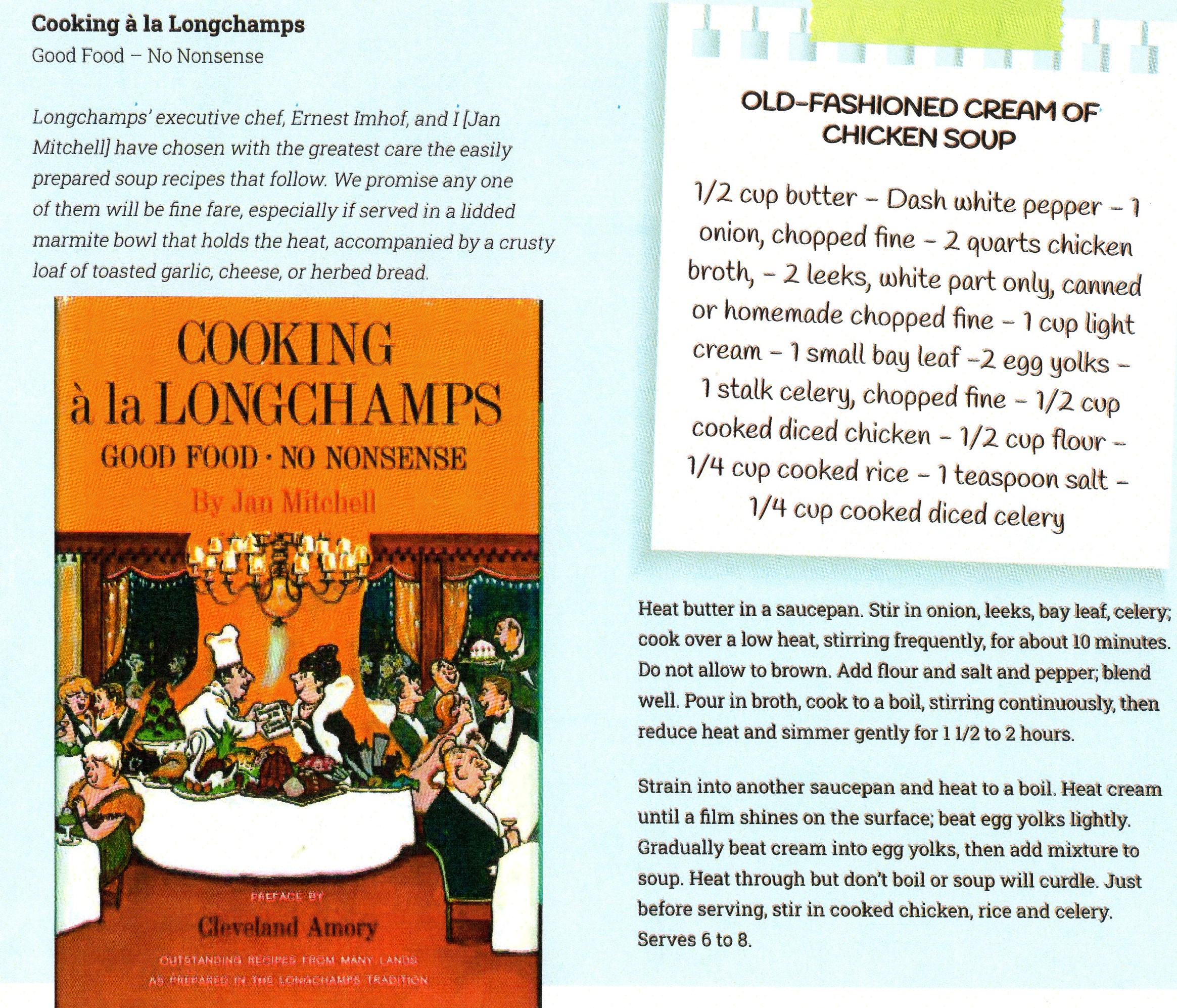 Pamela humorously points out that a decade ago her cookbook collection would have made the Guinness Book of World Records. In 2013 a collection of 2,900 cookbooks set the record, but today that record-setting number might have to be over 6,500. "There are over 100,000 food and drink culture books and documents (food writing) that were published in 2021," said her husband and My Cookbook Passion editor, Stephen Grogan. "Self-publishing and independent publishing have caused this niche market to continue to see major growth. The cookbooks that succeed today must either be penned by a celebrity or by an author who demonstrates, like Pamela, the passion of cooking/baking and the flair of marketing, where social media is vitally important."

Asking Pamela what sparked her interest in vintage cookbooks, she told me, "I would read a story about a person, restaurant, or recipe, and in that article they would mention a cookbook that sounded interesting, and I would go into search mode. It was a treasure hunt and the seeking was exciting and obtaining the book very satisfying." Asked for an example, she pointed out in My Cookbook Passion, that was how she acquired actress Sophia Loren's In the Kitchen with Love, first published in Italy in 1971. "I read a magazine article about the actress and how she liked to cook (and how she started writing the cookbook while bed-ridden with a difficult pregnancy). Finding this fascinating I went looking, and by chance found her book 'signed.' Many times the seller might not know the book they think little of has not only value but a personal perspective of the author." 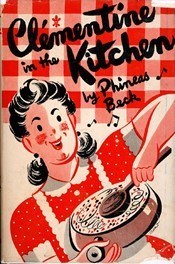 My Cookbook Passion is also touted as a "semi-autobiographical culinary work" that springs from her experience of years of working in various retail kitchen-food settings. Grogan used her "foodie" enthusiasm to work her way from sales associate to store manager of a Williams-Sonoma kitchen store in Oakbrook, IL. When she met company founder Chuck Williams at a conference, he learned of her interest in cookbooks and recommended a vintage title, Clementine in the Kitchen (Hastings House, 1943). She acquired that book, starting a collection that was based on passion, and resulting in several spin-off sub-collections. "I found I liked the small product advertising pamphlets, mostly for the turn-of the 20thcentury food art like for Jell-O or baking powder companies. I now have 500 of these colorful pamphlets, catalogued in 35 binders."

These exciting searches, the acquisitions, and certainly the food creation from heirloom recipes led to the publishing of My Cookbook Passion. It won the admiration of the IPPY Awards judges, taking the Cookbook-Specialty category bronze medal in the 2022 Independent Publisher Book Awards, and also received special recognition at the Gourmand World Cookbook Awards. The book features 200 colorful book covers and over 200 recipes, broken down into 15 chapters on the various types, from glitzy celebrity cookbooks to the more down-to-earth tomes created by Farm Journal, the long-running magazine that epitomizes the American agrarian tradition. Two chapters, entitled "Reservations Preferred" and "Jovial Ghosts of Dining," highlight cookbooks created by renowned restaurants, some living legends, some now defunct. 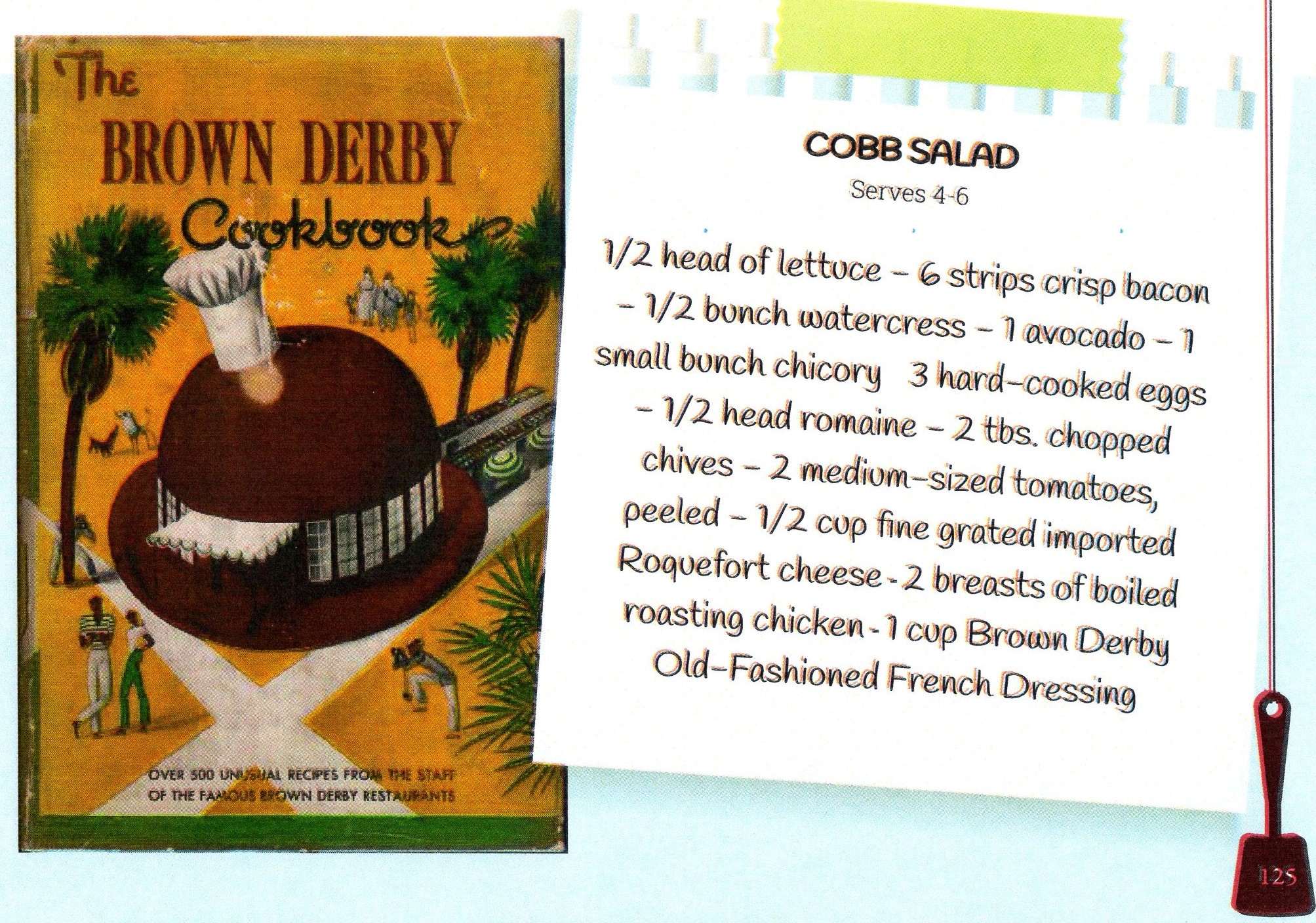 The "Bottoms Up" chapter covers the many and varied cocktail recipe books, including one from the Prohibition Era that has a 40-gallon recipe for "bathtub gin." Following that, "Entertaining is Fun!" explores books that helped the enthusiastic hostess plan the perfect dinner party. To end this chapter, Pamela shows off the depth of her collection by including a facsimile of the last luncheon menu of the RMS Titanic, signed by the youngest (and last living) survivor of the tragedy. She also shows her side collection of signed menus, including Jack Dempsey of his famed restaurant, or orchestra leader Guy Lombardo of New Year's Eve fame, signed on a menu from the Rockefeller Plaza's historic Rainbow Room.

"My collection was, I like to say, 'lovingly curated.' I think readers will find my cookbook intriguing because not only do I show the recipes as they were originally written, but I tell amazing stories behind the cookbooks and about the authors of those bygone times. Hopefully the reader can sense how these people improved on our desire to go to great restaurants or enter our own kitchens and enjoy what the authors were striving for when they first put pen to paper to capture a family recipe and improve upon it."

The book's most thought-provoking chapter is "Social Studies," which deals with the cultural changes in our society over a hundred years—through cookbooks. Pamela writes, "Instead of my writing pages of sociological content, philosophical observations, and personal opinions, it is best to let the book covers show America, for better or worse, as its people trudge out of the past into the future, and in the 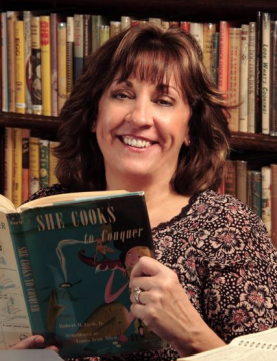 process change not only their eating habits but go through an enlightening of social ethics and mores." The first cover shows just how far we've come: Miss Minerva's Cook Book: De Way to a Man's Heart (1931), picturing a stereotypical Aunt Jemima-style  black woman in apron and bandana. Turns out the book's author, Emma Speed Sampson, was white! A more authentic book featuring an actual African-American author is A Date with a Dish: A Cook Book of American Negro Recipes (1948), by Freda De Knight, who was the cooking editor at Ebony magazine. On the sexual liberation front, The Working Girl's Own Cookbook (1948) evolves into The Liberated Cook Book (1972), while marketing gurus try to capture certain societal earthquakes like Saucepans and the Single Girl (1965), The Male Chauvinist's Cookbook (1974), or The Gay Cookbook (1965).

Experiencing this groundbreaking cookbook proves that we truly are what we eat, AND what we read. The cookbooks our society creates reflect so much about us, in all of our eccentric, multicultural splendor. We humans are complicated, ever-changing, and we have a huge appetite for both great food AND great books. As the pioneering cookbook author Julia Child would say, "Bon Appétit!"

My Cookbook Passion: Culinary History and Adventure in Exploring My Personal Collection

by Pamela Kure Grogan  -  website: Cookbook Passion – For Those Who Love Food, Cooking and Cookbooks