Have a Holly Jolly Editing Season

An Author's Guide to Surviving the Holidays

A Room in Athens: A Memoir 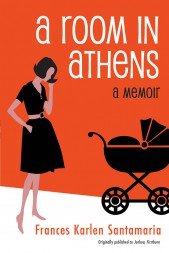 Review by Karen Chutsky
* * * * *
They say artists hover a bit outside of life; too obsessed with observing, contemplating and recording their impressions of it to be one hundred percent involved in it.
Such is the pensive writing style of Frances Karlen Santamaria, best described through the words of her adoring son: “...she dashed off written watercolor like impressions of people fresh and literary…some sympathetically rendered others verge on harsh caricature.”
And what better subject to render into vivid pictures than her first foreign sojourn at the age of 27, during the midst of the mad dash of the early 60’s in America to soak in the “Zorba the Greek” experience of Greece and other exotic European ports of call, “where your consciousness is stretched each second with total attention.”
Foreign travel has always been a rite of intellectual passage for the class of thinking Americans to which Frances and her husband belonged.
The synopsis: In 1964, off Frances went with Arno, the Holiday magazine writer and aspiring novelist at her side -- and soon to emerge son inside her for part of the ride -- a child who would become for the last three months of her adventure a gurgling focus more intriguing than that of the life around her in their last and longest stop, Athens, Greece.
What I find wonderful about diaries and memoirs are the raw emotions and images of life that so often become the dulled and manipulated stuff of fiction, written by those trying to capture the sparks of lives lived by someone else. Frances’ writing offers up her experience like a plate of steak tartar.
Though the book is billed as a comparison of the realities of Greek life versus the idyll of Greece – “eh” -- the main storyline bubbling through her memoir is purely the journey of a woman on the cusp of becoming a mother, as she quips; “the one major event of our grown lives for which we do not have our hair done,” choosing to have her baby at a natural childbirth clinic in Greece; thought of as a rather dubious thing to do at the time, while coming to  grips with marrying a man “with a built-in mistress”: a writing career. She describes it succinctly thus; “he seems about to write something…but whatever it is hasn’t emerged …and he lives around an unseen but felt iceberg lodged in his mind.” Her husband seemed to place a higher value on his own freedom to experience the night life of Greek tavernas with other young sponges dissecting the novelty of Greek life -- while his wife was sequestered to “a room in Athens.”
To quote one of those famous Greek philosophers she admired so, “Without strife, there can be no greatness.” And in the end, France’s wonderfully potent writing speaks its greatness in this memoir clearest to women, through the unique episode of life she and a handful of Greek woman experienced in their journey into motherhood.
Most notable are her vivid sketches of places and peoples, palpable as if one muddled through the grand tour of Europe -- though sadly, her diary of the months spent touring England, Italy, Spain, and Yugoslavia, pre-birth are reduced to a few paragraphs. They would have blasted open the tunnel of the book into a grander adventure. Hopefully, they will someday be compiled and edited into what would be a very worthwhile book.
Some vibrant excerpts:
“At twilight, the sky above Athens turns orange and the light in the streets takes on a purple tones of the bare mountains that semicircle the town.  Men sat drinking in cafes where women never went.  The city had awakened from its long afternoon nap and Athenians were out in their numbers, going back to work, shopping, strolling.  Soldiers—with custom-made uniforms hugging their bodies-- passed by in the twos and threes of soldiers everywhere, there were many of the righteous priests in their black robes, their hair braided in a knot in the back like a matador’s.  They had , without exception, the air of smug landowners…”
“Boys in white aprons ran by, swinging tripodic, long handled trays of coffee and ouzo--messengers of the Greek carry-out.  Occasionally, a cart rumbled by with a handsome young man standing up driving the horse, so like a charioteer I had to smile”
The greatest compliment I can pay her is that many of her fecund commentaries on life were just as poignant and literary as those penned by the great philosophers of Greek antiquity she so admired.
And though the reality of her Greek cultural adventure felt far short of her fantasy, as she realized “Ancient Greece is a state of the spirit only to which plane fare can’t take you,” the birth of her firstborn son did not disappoint.
A Room in Athens or the more befitting title from its first publication, Joshua, a First Born, exposes just the tip of the iceberg lodged in the mind of the very talented writer, Frances Karlen Santamara.
* * * * *