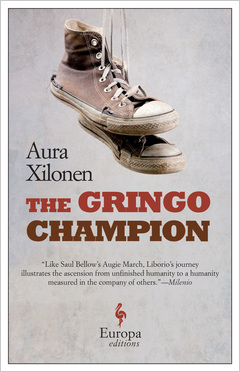 Review by Mari Carlson
The Gringo Champion is a “wetback” who earns his title by beating all odds. After crossing the Rio Grande into an American border town, Liborio is rescued by migrants, naked and blistered. He lives and works with them until they’re nearly caught by immigration officials. He escapes to a city where he finds work in a bookstore. There, he discovers the loves of this life: books and “the chickadee,” a beautiful neighbor. A fight to defend her lands him unexpected fame and a chance to channel his anger toward good.
Liborio’s primary opponent is not the one he hits, but his past. Aura Xilonen inserts Librorio’s recollections of his past in italicized sections sprinkled into his narration of the present. For the first half of the book, past and present are equally represented. But after Liborio shows his boss what he writes: “I saw her there for the first time, or what the hell ever, spinning serendipital through the trees of a pleistocene paradise. But she, with the fucking sweetness produced by blindness, didn’t see me until it was too late, mingled with a pagan night on a red bus, when we monsters sprout from the alveolar sewers of the city, under the hieroglyph that rains down ectoplasmic beatings on only a few, when amid the streets, amid the streetlights, amid the hanging gardens of the fucking starts, someone, in silence, falls in love,” the italicized segments end and the present takes over as the only narration. Jefe, the bookstore owner and Liborio’s boss, can’t believe this isn’t plagiarism. Just like other authority figures throughout Liborio’s nineteen years, Jefe can’t believe Liborio is capable of his own creativity.  And until he begins to write, Liborio is merely the product of years of abuse. He is, at first, leery of the words he reads in the bookstore (where he devours books), and feels threatened by anyone who tries to do him a good deed. He lashes out. But in this pivotal confrontation with Jefe, Liborio recognizes his own power – his pen and his fists. From then on, he puts his power to work for his own benefit. He lives in the present. He becomes not only a gringo but a champion.
As Liborio becomes more settled and the text becomes less bifurcated and less profane, I wondered if the story would devolve into a fairy tale. Would he marry the girl of his dreams? Would he become rich and famous? I didn’t want it to happen both for the sake of the story, which is beautiful in its edginess and the way it hops back and forth in time, and for the sake of truth. Fairy tale endings aren’t common among illegal immigrants; I didn’t want this fiction to spread false hopes. But the book exceeds my expectations. I was surprised by the final scene. Love wins, but not as I thought it might.
* * * * *

The author
Aura Xilonen is a novelist and filmmaker. She won the 2015 Mauricio Achar Prize for her first novel, The Gringo Champion.

The reviewer
When not reading books and writing reviews, Mari teaches violin lessons and practices and performs with chamber and symphony orchestras and folk ensembles in Minneapolis, MN and Eau Claire, WI. See all of her reviews and contact page at https://marisbookreviews.wordpress.com/
2017; 320 page paperback $ 17.00
ISBN: 9781609453657
Translated by Andrea Rosenberg
https://www.europaeditions.com/catalogue/reply/c8bf2712b3b35908ad539b0eca473de0/p1